The Notion of Disability – The Bakar Desk starts with sensibility

The Notion of Disability – Bakar Desk starts with sensibility

According to a survey, around 5 crore people in India are Disable, yet we never see them around us. People are generally ignoring the notion of disability. Supporting the notion that the experience of disability is a very normal and natural aspect of human difference. 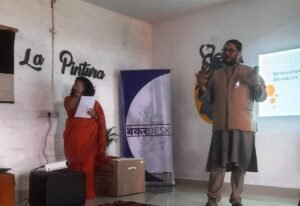 Starting with these thoughts Bakar Desk marked the beginning of 6 part series of talks and workshops.

The interactive workshop was an attempt to create awareness and sensitize ourselves around the theme. The aim was to discern the meaning of disability as per the medical model. And how it is different from the charity model of disability. Team also tries to portray the disability through the lens of   Bollywood. It is imperative to critically evaluate this space as Bollywood influences us all.

“Reimagining the Notion of Disability” was organized by Jaano Junction in association with Bihar Blues. The venue partner of the event was La Pintura, Ashiyana, Patna.  Ms. Supriya Ghosh, the mentor of the workshop, helped the participants to learn more about discrimination, disability, impairment, and handicap.

The Bakar Desk is an initiative by Nabhneel and Joy Mitra, the idea behind the initiative is to build a community of speakers, professionals, youth, and students to promote conversation around social and individual changes. 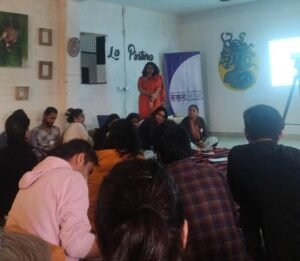 Ms. Supriya touched on some lesser-known topics like – Correct terms to address disability, Debunking popular myths about disability, Treatment of disability in Indian Cinema, and a lot more.

The workshop was highly interactive as the participants showed their utmost level of enthusiasm and curiosity with Ms. Ghosh answering them all.

This workshop marked the presence of eminent youth influencers and social justice activists, such as Reshma Prasad, RJ Rashi, Sushmita Ghosh, Faroghe Azzam, Richa, Abhinav Jha, and many others.

This was a nice initiative to aware the normal people about disability as people generally teach about it to the one who are challenged, said Ankita Raj, Co-founder of La Pintura .

It is very important to have open discussions on such topics and it’s nice that people have gathered here and shown their interest in talking about it and let’s reimagine the notion of disability, much needed!